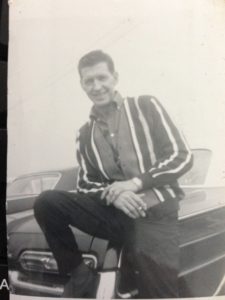 I’m quite certain she knew there would eventually be heartache in the decision to marry a man 20 years her senior. But the love was deep… strong… undeniable.

He was so handsome, so very full of life. One of those men that everyone wanted to be near – men and women, children and adults, all. Charismatic, kind, quick to laugh and have fun, slow to anger. Born and raised in the rural, mountain, coal-mining towns of Appalachia, he had moved to the big city in search of a better life for his family. Now he had two adult girls who adored him and a marriage whose life was at its end. These things happen, sadly. With the end of one thing, however, it makes room for the beginning of another.

She was young and inexperienced, a nursing student, with dreams and all the excitement of a life just beginning. Raised in a community of “old country” values and work ethics, she still lived with her parents. That is what was expected of an unmarried girl in those days. Dad wanted (expected) her to marry a doctor. She just wanted to finish her education and discover what awaited her as a career nurse.

Destiny… fate… luck… Whatever you choose to call it, it has its own ideas of how life will play out for each of us. I am convinced it is a good thing we don’t know what is to happen in the next day, week, or year. Sometimes it would be unbearable, I suspect.

And she did. She knew this love was “it” when it happened to her. It was an unpopular choice in the eyes of many around her, including her father. The age difference, the cultural difference… a divorced man! Quite a shock, but this love was not to be denied.

They were married on the first day of spring, it was a new beginning for him and the start of a life she’d never even dreamed of. By that time, everyone had come to understand why this man was so special. One couldn’t help but love him.

By Thanksgiving she was pregnant. So much excitement. They talked, and planned, and picked out names. You see… he wanted this child so very much. Although he’d lost two boys when they were babies, and he’d raised two daughters already, he wanted a little girl who looked just like his lovely new bride. He enjoyed being a parent and couldn’t wait to share his life and affection with a new child.

The holidays came and went, a whirlwind of family and celebrating. The new year began and they settled in to await the summer arrival of their precious gift.

January 4. It changed everything. A day that would haunt her heart for the rest of her life.

In their modest little apartment, on the near west side of Cleveland, she awoke that morning, as usual, lying next to the love of her life, ready to begin a new day. But he… they… never did again.

It was over before it had even begun, really.

He was dead at 45, she was widowed at 25. Suddenly alone and lost and scared. Dreams shattered. A baby growing inside her who would now never know his love.

It was over before it had even begun, really… Suddenly alone and lost and scared. Dreams shattered.

Can you even begin to imagine such a scene? The devastation. The finality. The horror.

The plans. The dreams. The hope. Gone. All of it gone.

I can… I was there that day. Well, maybe not how you might imagine.

January 4, 1966 changed my life also. I was there the day my mother lost the love of her life.

He was my dad – and he left before I ever really got here.

I would never know him, never hear his voice, never feel his arms around me. Would not learn to fish and hunt – or how to find wild plants in the eastern woodlands. It would take me almost 30 years to re-connect with his family, and my sisters, and begin to understand the man he’d been.

And so that is how my life started… Not yet born, and already I’d experienced a devastating loss that would impact every day of the rest of my life.

And I wish I could tell you that was the only loss I knew. But unfortunately loss is something I’ve come to know all too well in my five plus decades.

But that is not the message I want you to take from this narrative. No.

I’ve had an extraordinary life so far. It has not been very conventional by any means, but it has been memorable.

It took me a long time to realize abandonment wasn’t around every corner. Or, perhaps I should say, to accept the idea. I still struggle with a very deep fear of loss.

Life moves fast… We are all one heartbeat away from goodbye.

But with every negative there is a positive. And it has taught me to live with no regrets. And that, in turn, has allowed me to know the value of every relationship and all the emotion that accompanies them. Love, laughter, angst, disappointment, excitement, hope… all of it.

Leave no words unspoken, my friend. Do not assume you – nor anyone around you – is guaranteed tomorrow, or even the next moment. Life moves fast, and it changes in a heartbeat. Literally. We are all one heartbeat away from goodbye. 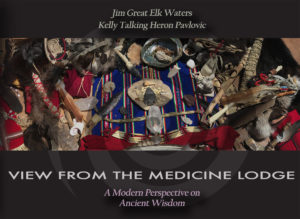 (Excerpted from “View From the Medicine Lodge: A Modern Perspective on Ancient Wisdom” by Jim Great Elk Waters & Kelly Talking Heron Pavlovic. Available on Amazon in paperback and Kindle formats.)