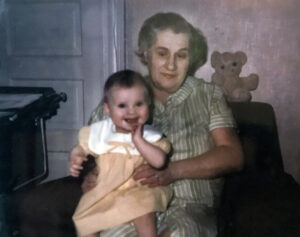 “Grandma, I have a splinter!”

“Sit down at the kitchen table and I’ll get the Ichthammol.”

Oh, the dreaded Ichthammol, aka “black salve.” My grandmother kept it in a drawer under the electric can opener and between the 1970s brown GE refrigerator and gas stove. It smelled like some stinking pit where dinosaurs died eons ago.

Back then it was packaged as a stick. She’d flick on one of the burners of the gas stove and get the end melting. Then on to the afflicted area it would be spread, bandage applied, and… wait. Wait for several days for it to do its job.

Grandma Violet kept the Ichthammol for warts, splinters, boils… anything that needed “drawing out,” whatever that meant. Always sounded mystical to me. But that “black salve” was one of her secret weapons. It rarely failed to do its magical work. And I always much preferred some stinky black stuff on my finger to the alternative, which was my (RN) mother digging around with a sterilized needle to get at the splinter. Ugh.

The afore mentioned drawer held all manner of magical things. Needles sterilized and set aside solely for poking and prodding (see above), ointments and other smelly stuff, bandages, medical tape, scissors, nail clippers, tweezers, matches. It was like a survival kit from some outdoorsmen’s satchel.

My Grandma Violet had a flare for “kitchen healing.” She’d raised three girls at the back end of the Great Depression, and was the second generation born in America to my mom’s family of Bohemian immigrants. Czechoslovakian, that is…

And I can still recall the smell of that drawer as it opened. It meant someone needed patching up.

My Grandma Violet had a flare for “kitchen healing.” She’d raised three girls at the back end of the Great Depression, and was the second generation born in America to my mom’s family of Bohemian immigrants. Czechoslovakian, that is – not to be confused with the wild and colorful gypsies who were mistakenly associated with that area of Eastern Europe.

My mom and I lived in her parents’ humble home in Slavic Village, along with one of my aunts. Dad died before I was born and so mom moved back for emotional support while raising a daughter and having to keep working as an RN. Grandma Violet and Aunt Marlene were surrogate parents to me and I learned a lot from both of them.

Grandma Violet had all manner of tricks up her sleeves for helping us feel better, including the ever present “hanky” tucked into a sleeve cuff. She seemingly could cure just about any minor ailment from something stashed in a drawer, the pantry, or even the liquor cabinet!

Grandma also always carried candied ginger and mints with her when we traveled – for motion sickness. She seemed to have a kitchen cure for almost every minor ailment. There was the dreaded Ichthammol but there was also Vicks Vapo Rub for my annual winter cold, cough, and sore throat. I was in my twenties before I realized you could wear flannel pajamas without the lingering smell of Vicks on the front of them.

Saltine crackers were not a snack in our household, they were for after you’d puked your guts out and needed a test to see if you could “keep something down.” This was no hardship for me. She always had them schmeared with salted butter and blackberry jelly. Yum! And served them with… Vernors. Yuck.

I always hated Vernors. (For those of you not familiar, it is a ginger soda.) Growing up in my house, it was used as a curative, not an everyday beverage. To me it always had a much stranger flavor than, say, a Canada Dry type ginger ale – maybe it was the vanilla they add. And for years I associated it with vomit. Not the saltines! Just the Vernors… flat Vernors. Vernors that had deliberately been left exposed to the air to decarbonate and get room temperature.

I was in my thirties before I learned to enjoy it as a tasty beverage. Funny how we associate smells and tastes with emotions. I still have a faded lingering memory every time I pop open a can.

I recall that Grandma used alcohol as medicines more than recreation. Sure, she enjoyed an occasional holiday “highball” but mostly she used distilled spirits as kitchen cures.

There was blackberry brandy for when we had, let’s delicately say, “intestinal issues.” And Rock n Rye – a tasty concoction of rye whiskey and rock candy, often with an orange slice floating in it. This delectable treat was reserved for when I had a bad cough. It was either given to me straight or in some tea.

Medicine wo/men and grandmas have been using herbal medicine for eons. “Modern” medicine has scientifically proven many old timey remedies and we now have them in pill form. Aspirin, digitalis, ephedrine, just to name a few. Nature has it all laid out for us, grandmas the world over have known it all along.

I vaguely remember having straight whiskey rubbed on my gums when I was cutting a tooth. It surely did make the pain go away. And grandma gave us Kümmel (a caraway/cumin liqueur) as a digestif when we had bloating and gas. It worked, too!

All these magics I grew up with in an Eastern European home. Grandma taught them to me by example. And, because they were effective, I retained the teachings. I use them to this day.

(Truth be told, I actually own some Ichthammol! Hey… when something works, it works. And I get to avoid those probing sterilized needles.)

My Grandma Violet was a kitchen healer.

She used items that we now consider to be “everyday” household objects and substances to comfort and heal the ones she loved. It was the way she learned from her mother, and her mother’s mother, etc.

Physicians were very expensive, and employer sponsored health insurance was not widely available before World War II. Blue collar workers, and the European farmers from whom they descended, dealt with minor illness entirely at home.

Herbs, seeds, roots, spices combined with water, fats, or alcohol allowed for a wide range of medicines. Decoctions, ointments/salves/liniments, tinctures, teas. And let’s not forget poultices. I’ve heard so many stories of old European grandmas foisting stinky onion or garlic poultices onto children’s chests with such care and love, doing what they knew from experience would help ease discomfort. There were even herbal bags called asafetida that people wore around their necks to ward off all manner of illness. But that’s more on the side of my dad’s Appalachian family.

Medicine wo/men and grandmas have been using herbal medicine for eons. They were called healers because, for the most part, the stuff worked! All good outdoorsy folk know that a poison’s antidote can be found nearby.

“Modern” medicine has scientifically proven many old timey remedies and we now have them in pill form. Aspirin, digitalis, ephedrine, just to name a few.

Nature has it all laid out for us, grandmas the world over have known it all along. 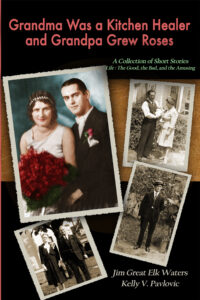