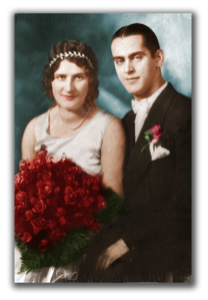 Grandpa George loved flowers. More specifically, he loved to grow flowers. In the spring our tiny front yard had tulips – red, yellow, white, striped, purple, pink, orange – and daffodils too. And then there were the hyacinths. They smelled so wonderful, Grandma Violet used to love to cut them and bring them into the house. The smell was intoxicating.

My grandfather was a stoic man. He rarely showed emotion… But [his] pride and joy… were the roses. There were long stemmed, clusters, white, red, peach, pink, lavender, and yellow… He tended to those rose bushes like they were his children.

In the summer, he grew gladiolas, snap dragons, zinnias, dahlias, asters, in every color of the rainbow. The bumble bees spent all summer crawling in and out of the snap dragons, it must have been quite a party for them. There were butterflies, too. So colorful and intricately patterned.

Grandpa George carefully tended all the flowers that grew from bulbs – taking them out of the ground after flowering, storing them in the basement, and then replanting them meticulously. Year after year I watched the rhythm of my grandfather’s gardening habit. Our front and back yards went from drab to an explosion of color within weeks. Once we saw the green pushing through the ground at the front of the house, we knew the gardening season had started in earnest and that my grandfather would be out there watching over the progress.

But the pride and joy of my grandfather’s flower garden were the roses. There were long stemmed, clusters, white, red, peach, pink, lavender, and yellow. They lined the perimeter of the little patch of lawn we had at the back of our house. He tended to those rose bushes like they were his children. Constantly checking, trimming, pruning. In the fall when the blooms were done, he would carefully cut them all the way back, readying them for the long Ohio winter.

My grandfather was a stoic man. He rarely showed emotion, had a pain tolerance inconceivable to most human beings, and kept his innermost thoughts and feelings to himself. He read and watched the news a lot. And loved baseball in the summer, football in the fall, and basketball in the winter and spring. He was very opinionated about politics and current events. But other than those things… You never knew much what was happening in his head. “Feelings” were not something he ever shared.

But those flowers, those little organic factories that turn sunlight into glucose – he was head over heels about them.

Literally. He had his cushion that he would kneel on, but just as often you’d see him out there bent over in half, butt up in the air, picking out weeds, or just loving his babies.

While he was still working, gardening was the thing he looked forward to doing after work, or on weekends. After he retired, it was his main hobby and he indulged every chance he got quite late into his life. He worked in those flower patches for as long as I could remember.

Eventually, time took its toll and he was no longer able to care for them as he had his entire adult life. Bit by bit, they no longer flowered. Bulbs didn’t get planted, and the rose bushes grew out of control until my mother began teaching herself how to care for them.

Sadly, there were things he could so easily give to the plants, yet was clearly uncomfortable giving to his human family. That’s not to say he didn’t feel the same way about us as he did those roses and other flowers… He surely loved us.

After he died, my mother moved out of the old house and into suburbia. She brought the rose bushes with her. That is, any of them that had still survived. She lovingly and carefully transplanted them from their longterm home in the city to her new surburban plot south of Cleveland.

She helped them thrive for several years. Alas, the ground was not ideal, hadn’t been lovingly tended and fed for as many years as Grandpa had done it. The last of them died a few years later, and we both were really sad. We loved those rose bushes. Having lived with them during all my growing up years, it was sad to think they wouldn’t “be” anymore.

As with all things, nothing lasts forever. Not even the roses.

Unbeknownst to me at the time, my grandfather taught me some things about life.

Sadly, there were things he could so easily give to the plants, yet was clearly uncomfortable giving to his human family. That’s not to say he didn’t feel the same way about us as he did those roses and other flowers. He just wasn’t raised to be demonstrative. He surely loved us. He was a reliable worker. He provided for a wife and three girls during and after the Great Depression, and then gladly welcomed his pregnant youngest back to the nest after she was widowed, and his middle child after divorce.

What he could not outwardly show us, he still managed to teach – the patience of planting seeds and nurturing them, and continuing to care for them even after they were full grown. Seeds come in many forms, you know. There are the ones that grow into plants, but there are also the ones that grow into thought and action, characteristics and habits, children and adults.

In my family I learned that no one was without fault, and no one was entirely beyond forgiveness for those faults. We weren’t the Brady Bunch. I grew up in an unusual family group (mother, grandparents, and one aunt) but I was very loved. Even by a grandfather who had ideas and ways that were firmly set in stone. He loved us. In his own way. His gardening showed us all a glimpse of a man who cared deeply.

Now in my 50s, I find myself understanding more than ever Grandpa’s passion for flowers. There is a sense of accomplishment in watching something grow and mature. Tending to it, feeding it, and enjoying the eruption of color as a reward for commitment and care. It took me moving to the desert, where life is so precious, to appreciate that which was all around me.

I am continually awed at the abundance of plant life and bursts of color, especially in the spring. It is an environment where all that grows has adapted over millennia to exploit every drop of rain – even when they are weeks apart – and to protect itself from the punishing sun, and the spectacular storms of monsoon.

This year I planted six rose bushes of my own. They joined the four jasmine plants I added to the north wall last spring. Scattered around are pots of sun hardy herbs, Spanish lavender, and flowering succulents. This spring I even bought six hyacinths and will learn how to care for the bulbs, just like grandpa did. I am finding immense satisfaction in the process of tending flowers. They bring me great joy, and now… now I understand my Grandpa George better indeed.

Plant seeds generously, nurture them selflessly, and bask in the joy of seeing them grow into beautiful maturity. 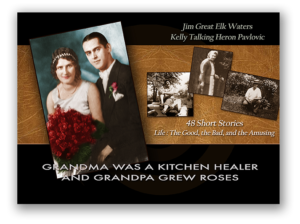 Look for it on Amazon (paperback and Kindle) later this summer. Along with our other books: