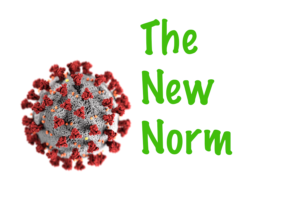 With the conversation today all about the “New Norm,” we thought it might be interesting to dive into just what is the “New Norm.”

Let’s start with the basics… the word norm is a derivation of the word normal, whose roots in latin normalis. With us so far? The latin normalis meant “something made with a carpenter’s square.” That’s definitive! Something perfectly aligned. No wiggle room here!

OK already let’s not wander too far. We’re talking about the word norm not normal, for sure not the Latin thingy, normalis.

Eventually this meaning broadened to fitting a pattern, standard, or average, a set of rules to defining how society should and should not conduct themselves. So… a norm is a guideline or an expectation for behavior? Yes? As civilization evolved every society has made up their own rules and when those rules have been infringed, and who gets whacked. Well, not usually whacked like killed, but surely must be punished.

The constant with our norms is that they change constantly… but are basic patterns of behavior that are expected.

The first use of the word normalcy happened in 1920 as a promise by then presidential candidate, Warren G. Harding during his campaign, indication the “Return to normalcy,” a return to life as it was before the War to End All Wars.

One size does not fit all

Now that we have the basics in place, let’s see what “New Normalcy” means now, and in the future.

At present there are so many surveys, estimates and “guesstimates,” polls and models out there, that it is impossible to get a real feel as to what the people want. We know that there is a very real concern that this crisis is changing our norm without foundation. Scientists have one wide spectrum modeling, the medical profession another based on their real time experiences and intuition, while businesses large and small are widely divergent. The rest of us, the common folk, can only try to find a place to hunker down and “rider er out.”

This is a TerribleTime… a Big Balled up Mess!

The Story of the Norm of the migrating masses

Between World War I and World War II many people moved to the city, to be closer to work in factories and retail districts. We changed from a farming society, with most people living in rural areas and small communities… to large populations in major cities. This was not a new norm, but was a repetition of earlier migrations from the rural to urban areas in Europe and Asia.

This was a new norm that would become firmly entrenched in American society.

After World War II those returning home created a new environment called the burbs. Folks spread out in the communities on the outskirts. Thousands of miles of highways along with massive automobile production enabled them to live outside cities, but close to urban work daily. This was a new norm that would become firmly entrenched in American society. This lasted until the beginning of the new millennium. Now, that was kewl! A New Norm that worked!

Norms took a big change In the millennium

In the late 1990s the lore of big city life enticed many to return to the high-rise and towers in cities like New York, Chicago, San Francisco and Los Angeles. Many of the old factories and warehouses, abandoned as America outsourced production to other countries, became prime real estate for those returning masses.

Even after 9/11, the attack that shook our nation to its center, and changed forever how the New Yorkers view their safety, the movement continued. Warehouse district became the place to be seen, to live, and to enjoy the benefits of the city. Life was good. This became yet another new norm.

As more people packed the cities, real estate footage came at a premium. Two and three-bedroom apartments and condos became one and two bedrooms and studio units… some as small as 300 square feet. These Micro units were all the rage… another new norm.

The “Bat Virus from Hell” – the worldwide infection

Last December we first learned of a new virus that exploded into our lives, immediately changing our norm. Within days people were dying by the hundreds, first at the epicenter in Wuhan China, across western Asia and then the virus now known as Novel Coronavirus 19, or COVID-19 permeated nearly every city and region in every country worldwide.

The new norm… was the COVID-19 Pandemic

In a mad rush to protect their citizens, leaders, scientists, medical professionals, common people and conspiracy theorists vied to be heard. Literally within days the world as we knew it shut down. This was a crisis of unknown proportion, driven by an acute lack of knowledge of its origins, its contagiousness and strength.

Countries closed their borders, ordered their citizens to stay home and avoid contact with other people. Businesses shuttered and unemployment skyrocketed. It was as if the Black Cloak of Death settled upon the face of the earth. This was a feeling that most in the civilized world had never experienced… but was all too common in many Third World countries.

Here in America, our President, most of our national leaders, governors and mayors began issuing “guidelines.” First came the “stay at home” orders followed by full scale business closings, followed by mask mandates, hand washing, social distancing, testing… and the list goes on.

Panic, the next new norm was driving the crisis

People were staying home for fear of contracting the virus. With no customers many businesses ceased operations. Soon much of America became a ghost town.

People automatically began social distancing, defined at “6 feet,” because no one knew who had or didn’t have the “virus.” One of the first new guidelines that came out was to wear masks in public. The CDC recommended everyone wear cloth face masks in public places where it was hard to stay 6 feet apart. They cautioned that children under two, and people who had trouble breathing shouldn’t use them.

The choice of masks became staggering. The most recommended were N95 respirator masks, but these were in short supply because they were reserved for first responders and medical staff. Likewise the surgical masks were for those who were protecting the population.

The supply of extra medical masks was scarce and were soon replaced by grassroots handmade cloth masks and neck gaiters, along with shop dust masks, neoprene masks, bandanas, and any cloth items that would cover the nose and mouth.

Oh, did anyone mention Toilet Paper?

One could understand hand sanitizer and bleach because that along with alcohol could most assuredly kill a virus. But toilet paper? Often people become irrational in a crisis, and this one certainly bore this out. Ya know, sometimes people just become “Bat Crap” crazy!

Often people become irrational in a crisis, and this one certainly bore this out. Ya know, sometimes people just become “Bat Crap” crazy!

The logical practice of hand washing became yet another norm, soon followed by hand-wringing decisions as to what kind of soap, how long to scrub, and how often to restart the cycle. We’re not sure if this has officially been determined, but seems that using common bar or liquid soap, and washing hands for 20 seconds is now the norm.

Social distancing has formally been ensconced into our society

The 6 foot norm has become a requisite in lines, both outside and inside most establishments. Many businesses such as grocery and big box stores have resorted to one-way aisles to maintain realistic spacing. As more operations are opening up they are establishing logical spacing, to protect their staff and patrons. Martha Stewart would say, “This is a good thing.”

Handshaking as we know it will be greatly suppressed for the foreseeable future, or until a vaccine has been developed. There will be the obvious non-contact acknowledgments such as the head nod or verbals like, “How’ya doing?” It is inconceivable that there will be a return to contact types of handshaking like the standard grip, the fist pump, the hi-fives, the elbow touch, and the DAP.

The traditional handshake originated in the time of swordplay. It became the custom to offer your “sword hand,’ the one to draw your sword. This was a sign that you meant no harm and that you could be trusted… at least for the moment. That was an Old Norm.

There are so many variables still possible that will change our lives. They remain undefined. Only time and education will help us to determine our next steps.

Will testing continue? What kind and how often, and how effective will they be in protecting people?

Will the virus return? Will it be as contagious… And deadly?

Will the COVID-19 become another common flu in the years to come?

Will people become wary of being in close contact with others, once again fleeing to the burbs… Or will they rush back to the city as they have in the past?

People are ready to establish the next new norm! Recently the Governor of Arizona shared that forty percent of Arizonans are reservedly ready to go to work, another thirty percent are bustin’ to return “full on”… and the other thirty percent are deeply concerned that anything but shelter at home will result in complete devastation. It is most interesting that these numbers generally reflect the temperature of those in our circle.

Undoubtably our Freedoms and Constitutional Rights have been severely compromised. Will we restore our confidence in our leadership, our Rights and our responsibilities… Or will we continue to forgo them, allowing others to make the decisions for our best health and welfare? Only time will tell.

Crisis and conflict will always be the twin red-haired stepchildren of our society, but they will never be what drives our civilization forward.

As has been past practices, often after a crisis, the majority will return to old familiar and comfortable norms. We Americans have always been a resilient society able to manage our lifestyles without the interference of elected officials. Crisis and conflict will always be the twin red-haired stepchildren of our society, but they will never be what drives our civilization forward.

We predict that this time, America will resort to the old ways, with a mix of new ones. We are an independent but reasonable lot. Good or bad, the decisions forward will be that of the people, not our leaders, scientists or medical professionals.

This is the American way, a way that will always be the Core Norm.

NOTE: The word “Norm” appears more than 30 times in this article. Symbolic of how our norms ebb and flow, and assuredly will return to its core.