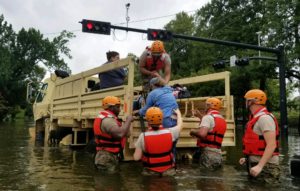 And the Rains Came…

The near continual rains and recent flooding worldwide are producing great tragedies across huge swaths of several nations. We are sacrificing small towns and farms to save large cities. Once again the loss of lives and dollars is incalculable.

The summer of 2018 was marked by deadly floods around the world. The Guardian reported that, “Global floods and extreme rainfall events have surged by more than 50% this decade…” In East Africa the floods are an ongoing in Kenya, Ethiopia, Uganda, Rwanda, Somalia, Djibouti, and Burundi affecting millions of people. Heavy downpours in southwestern Japan resulted in widespread, devastating floods and mudflows. The worst flooding in nearly a century affected Kerala in the south of India, and likewise in Vietnam and North Korea – in fact on every continent there have been natural disasters this year. In the eastern United States, America is still feeling the impact of these disasters.

Common folks risk their lives to help their neighbors.

One needs but to read of this epic deluge to understand what “impossible” is. Noah was of great faith and believed…

In each case its a fact that the strong pull together to aid those less fortunate. This is when the soul of all people is weighed. This is not a test of physical strength, but that of fortitude and caring. Again, the essence of human experience is beyond measure.

For those of us not affected, our compassion and prayers go out to those in peril… and our hearts mourn for the lost. May Creator’s arms surround and comfort each of you.

Indeed our Grandmother Earth is in a rain cycle. We write this not to address the why, but about the how – how people in all walks of life step up when it counts.

We certainly are facing difficult and challenging times. These tragic floods and rains are extraordinary. But there have been greater deluges. In the last century people everywhere have endured great floods.

All this liquid overburden recalls the biblical legend of Noah.

Now, THAT was a flood!

One needs but to read of this epic deluge to understand what “impossible” is. Noah was of great faith and believed that if G_D said “build an ark,” he knew, through faith, that he had to accomplish this heroic task.

Changing your perspective from “unachievable” to “doable,” changes the very chemical makeup of the brain.

For many, when faced with the impossible, we believe it is just that, unachievable. “Why try?” is the common reply. But in the end, there are those who rise above this thinking and search for options.

The popular phrase, “The difficult we do immediately, the impossible takes a little longer,” surely is appropriate. This time proven quote of great merit should be our mantra whenever we are faced with challenges, large or small.

In Noah’s situation, he could have said to himself, “This can’t be done.” And “I quit.” But let’s get into Noah’s head… he hesitated, and whined a bit, but he knew that to say no to G-D was not an option. Undoubtedly, he had to rethink his perception of such a large task. He knew that he couldn’t do it all at once… but if he broke it down, into smaller, doable parts…

This was without doubt one of Noah’s “Ah Ha” moments. As he studied each small element of the whole, he began to fit each piece into the “Ark Puzzle.” Piece by piece he began to eliminate the word “impossible,” and replace it with “I probably can.”

Now he had made the situation doable.

Stick by gathered stick, a craft constructed cubit by cubit of gopher wood, soon became the ark G_D had instructed him to build. The “safe house” to secure the seeds of all Creation for the long, dark float.

This is a teaching story of biblical myth, of obedience, but more… in belief that all things are possible. One doesn’t have to be Judeo/Christian or Islamic to understand the message. When disasters strike, step up and do the work at hand, “impossible” or not.

Noah did the “impossible” bit by bit. That is exactly how miracles happen, accepting that there is action that needs to be undertaken, and doing it.

Changing your perspective from “unachievable” to “doable,” changes the very chemical makeup of the brain. Endorphins and/or adrenalin kick in. Did he get an “endorphin rush?” Whatever actually happened, Noah overcame. Noah didn’t stop, but persevered in this impossible task.

When we eliminate the word impossible, all things are possible… one step at a time.

I am not suggesting that we are confronted with his particular challenge, but in our lives, we encounter what seems to be “impossible” situations…

“I can never do that, it is too hard… too difficult… it’s ‘impossible.'”

Let us rather take a page from Noah’s playbook and break down our ordeals into workable parts… take separate pieces and “chunk them together,” bit by bit.

When we eliminate the word impossible, all things are possible… one step at a time.

Now it is your turn. What are your dreams?

Your impossible possible something that you want to achieve?

You must believe… in yourself.

Now is YOUR TIME, your time to begin making YOUR DREAMS come true.

Set your goals high – “impossibly high” – then start by “chunking” them down into reality, bit by bit.

You can “Achieve Your Maximum Potential.” Do it!

We are anxious to hear of your success over the “impossible” stories.

Thanks for spending time with me. I hope this was enlightening and energizing.