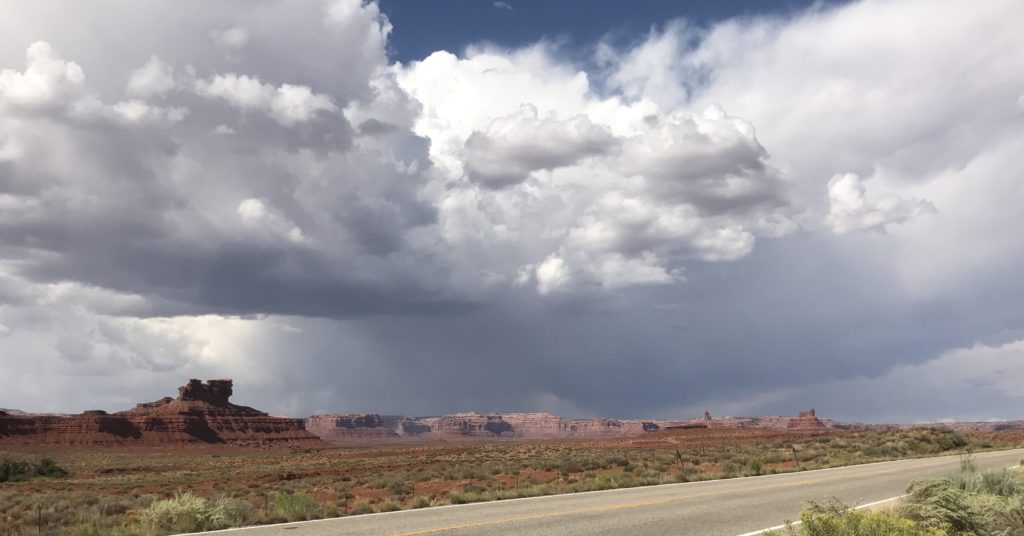 As someone whose spiritual path reveres and closely follows the wonders of Grandmother Earth and lives closely in the rhythm of nature, I have found myself in a wonderland of nature here in Arizona. The drama is undeniable and, for me, constantly astounding.

We’ve been here almost a year now and the change of seasons has been beyond enjoyable. That statement alone is quite interesting. For the two plus decades I’ve wanted to live in this desert, I’ve listened to people tell me how they could never tolerate the lack of seasons. Although I’d not been here for all the seasons, I’d seen enough to know that they definitely existed.

And oh my, how they do indeed!

Technically, we have 5 seasons, so we’re already “up” on the rest of the country as it relates to changing weather. Spring, Dry Summer, Wet Summer (Monsoon), Autumn, and Winter. Watching the seasons change around here may not, at first thought, seem as dramatic as the difference between blizzards, spring & summer thunderstorms, and the color of fall leaves. But it is even more than that.

Nature’s rhythms display many facets. It’s not just related to extremes of temperature and leafed out or bare trees.

This past year I have watched the change in sunlight from the winter solstice through the autumn equinox, where the sun and moon sets are there for our enjoyment as our house faces dues west. When we moved in last December, the sun set far to the south and as the weather warmed, the sun came closer to Mother Earth, and it made a journey north until it hovered there during the summer solstice.

Even the quality of the light has made a round trip journey these last months. During the winter the light was noticeably weaker, but not near as weak as we are used to in northern Ohio. The sun power stays strong. Amazingly strong. And the temperature swings from dark to midday were dramatic.

I waited anxiously through spring, watching for the much talked about spring desert flowers, and closely monitoring the pool temp – I am like a five year old when it comes to pool play time… it’s never long enough!

I was amazed to see several trees not drop their leaves until spring, just before they bloomed brightly in flowers and pods! And then saw the desert plants change from brown to bright green with the spring rains.

Summer came, the markets and festivals closed down (daytime temps here routinely stay in the 100-110s from June through September). Windows got closed, and sun screens went on west facing windows, and we hunkered down to endure multi-hundred dollar AC bills.

We don’t observe daylight savings time here in most of Arizona. By summer solstice, the sun rises very early and it is daylight by 5am. This is the time when Phoenicians scurry out to do activities which will be intolerable by 10am.

The storms we get are not just any old garden variety thunderstorm. They are massive, and epic, and nothing if not dramatic.

I used to think that after I moved here, I would really miss the short nights and very late sunsets of the north. Having been born and raised in northern Ohio – where it is daylight in summer until 9:30 or 10pm, and spent a couple summers in Sweden where the sun set at 1am and rose again at 3am… these short summer days were a mild concern.

During monsoon (wet summer), the humidity combined with such high temperatures becomes oppressive at times. The pool water heats up to the point one actually considers throwing bags of ice in it just to cool it down.

The storms we get are not just any old garden variety thunderstorm. They are massive, and epic, and nothing if not dramatic. They are the talk – in tones of awe and amazement – by everyone on the local town bulletin board. “Where did that lightning strike?” “Are the washes running, and which ones?” Like little kids in a candy store. It’s wonderful. And I have come to enjoy it immensely.

There’s a lot of horizontal lightning here. We don’t really see that in Ohio. And the intensity of the storms is both sobering and a wonderment.

This fall has been the third wettest in recorded history in this area. Since we mostly visited in summer months and tried to get out before monsoon, I’ve never see the desert this green and lush. I am amazed that there is grass growing on lots that are usually dirt and also on the desert floor. We’ve had two hurricanes move through here recently, on their way from Baja. They were all day rains – something we don’t see much here. We get dramatic, short-lived, violent storms and then it’s over within an hour or two and the sun comes back out. Those hurricane days, the pool flooded. Also something new and interesting to us… we’ve never had a pool, let alone one that flooded.

I stayed in all day and watched/listened to the rain while monster movies played on the tv in the great room. It was a kind of comforting relief after the brutal sun and temps of the summer.

Now I await the return of winter. The leaves are already turning yellow on two of our mesquites. The light in the backyard is changing – weakening at the same time more of it is coming through from the dropped tree leaves.

Nights are cool enough to keep windows open and it’s good sleeping weather. The fireplace pilot is turned on and our beloved Greystoke the Cat is anxiously awaiting the comforting warmth. We’re even preparing for holiday decorating – something we didn’t get to do last year.

The farmers markets are re-opening and the local festivals are returning. Snow birds are arriving back to their winter home and the town is coming alive once again.

Interesting that, here, in this harsh and potentially dangerous land, we come alive during the time the rest of the country (and many parts of the world) are buckling down and prepping for winter.

We welcome winter – because it is a relief of sorts from the heat and dry, and the intense storms.

And so what does all this blathering on about my experience with Arizona weather mean to any of you?

I hope at the very least that you have gotten a sense of my wonder and respect for the incredible weather and acts of nature in my new home. And know, on some level that touches you personally, that it comes from my deep spiritual reverence of this dear land we call Grandmother Earth. She is full of magic.

Wherever you call home.

I hope… you have gotten a sense of my wonder and respect for the incredible weather and acts of nature in my new home.

I also hope you have gotten a sense of the loveliness and peace of allowing the seasons to roll by… and enjoying whatever bit of magic comes our way.

The deep blue skies and almost total lack of humidity most of the year. Surreal lightning storms during monsoon. And intense sun by day with air so cold it requires “winter” clothing – typically in the same day – during the winter months.

There is the wonder and amazement of nature’s rhythm all around us. All of us. Everywhere.

Part of “Stepping Outside of Time” as we know it, is to be aware of these rhythms. And it’s not just seasonally.

Becoming Aware… and the Gift of Observation

Are you aware of the rhythm of the sun and moon? Every day, they rise and set. And they move in a predictable pattern. The sun more slowly than the moon.

The moon is in a 28 day cycle. Every day, if you’re so fortunate for clear skies, you can see it move across the sky and rise and set at progressive times and locations.

The sun moves daily and also by the seasons.

There is so much to observe and take note.

In all of this I’ve not mentioned the smells and sounds. Creosote bushes in the rain, pine needles in the forest, thunder rumbling, rain falling, and the whispering sound of the wind in the green things around us. And the wind-made dust devils in the summer desert.

Grandmother Earth gives all the calendar we need biologically to track the passing of days and years.

No, She won’t keep your appointment schedule for you. Nor your party plans.

But She will provide everything you need to judge the weather, season, and clues to what is good to eat now. If you are not already doing so, pay attention.

Have I mentioned?… it’s magic.